The Winter Festival of Lights

Enjoy Canada’s foremost illumination festival in Niagara Falls as we capture the magic of the winter season! 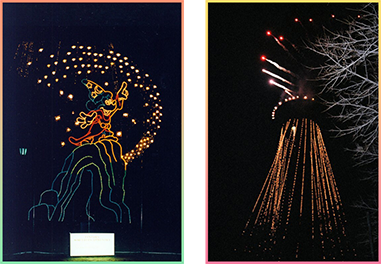 The Festival was created as a way to extend what had (for more than a century) been a summers-only tourism season in Niagara Falls. During its first season, the Festival had a small collection of lighting displays located near the Falls, drawing a respectable 250,000 visitors. Each year the Festival displays were expanded and audiences grew larger, quickly making a visit to Niagara Falls an annual winter tradition for family and friends.

In 1992, the Winter Festival of Lights partnered with Disney for the “Enchantment of Disney” program, which included over 20 animated displays of Disney Classics throughout Queen Victoria Park and an opening ceremonies with Disney characters. Unfortunately, in 2013 the Disney displays were removed as Disney decided to limit their character appearances to their theme parks.

From 1998-2006, the Festival introduced a weekly Night Parade of Lights, featuring illuminated floats.

After the Disney years, the Festival introduced different themes including a Korean Lantern display, art installations, and interactive light displays. In 2020, the Winter Festival of Lights doubled its inventory of displays and in 2021 almost doubled the duration of the Festival from an average of 54 nights to 101 nights.

Today, the Winter Festival of lights transforms Niagara Falls into a palatte of breathtaking colour from mid-November to Family Day in February. Millions of twinkling lights, engaging displays, and interactive experiences continue to enhance the annual winter tradition along the route of the Niagara Parkway through Dufferin Islands and into the tourist districts of Fallsview Boulevard, Lundy’s Lane, and Downtown Niagara Falls.

Focused on providing fun for all ages with family-friendly displays and entertainment, the Festival continues to expand on its themed display areas like the Royal Promenade, Frosted Falls, Enchanted Forest and Great Canadian North. Illuminations include more than 50 larger than life displays and dozens of trees wrapped in lights along the Niagara Parkway, including Canadian wildlife displays, the two-storey tall Zimmerman Fountain, a Gingerbread house, 60ft light tunnel, castle and more!

The Winter Festival of Lights is presented by Niagara Falls Tourism in partnership with the Tourism Partnership of Niagara, Niagara Parks Commission, and local Business Improvement Areas.

The Festival has earned countless event and tourism industry awards including Event of the Year, Top Festival/Event in Ontario, Best Volunteer Program, Most Innovative Partnership and the prestigious Events of Distinction Award from Festivals and Events Ontario (FEO). In addition, the American Bus Association (ABA) has long recognized the Winter Festival of Lights as one of its Top 100 Internationally Known Events.